By continuing your visit to this site, you accept the use of cookies. Read more.
« back — written by Brent on December 12, 2020

You could have written a master piece of a blog post, still people won't magically discover it. You'll need to know ways of reaching your audience. Better said: you'll have to create that audience yourself.

When I started blogging I mainly used Reddit as a platform to promote my content. It was a good start: I got feedback — some valuable, some rather harsh — and I got a feeling what it was like to engage with an audience.

During those first months, I learned a few important lessons when it comes to building an audience.

At first, I only posted to one subreddit. In hindsight I now know that choice was limiting the growth of my blog: I only focussed on a small part of my potential audience. Slowly I discovered more and more channels to reach people, and my blog started to grow in popularity.

For example: I started thinking about what other subreddits would be interested in my content. I blog about web development and PHP (a programming language), but I only posted on the PHP subreddit. So I tried to discover new subreddits and I started to look beyond Reddit as well. Over the years I've accumulated a list of channels that I know my content generally does well on. I'm happy to share that list, but keep in mind that your audience will differ from mine, depending on the topic.

It's important to note that there are different categories of channels. There's channels like Reddit, Hacker News and Lobsters where you post links to your content and that's it. Then there's channels like Dev.to, Hashnode and Medium which I use to cross post my content. That's right: I actually copy my content and republish it on those platforms. There's a reasoning behind this, but we'll cover it in a future chapter. Next there's the link aggregators. These are often smaller sites, but with a dedicated audience. Finally there's Twitter which I consider to be the place where my closest audience lives. There's lots of one-on-one interaction, but you'll need patience for your follower base to grow.

Most of these platforms require more than dropping a link and forgetting about it. If you want your content to be well received for years to come, you'll have to invest in public relations.

# Engage with your audience

Reddit is the perfect example here. Most subreddits are a community with a tight core. Regular redditors start to know each other after a while. It's valuable to actually engage with people on platform like Reddit: partake in discussions on your own posts, but on others as well. Try to post content besides your own, try to be a valuable addition to the community. I realise it takes time and effort to integrate with these kinds of communities, especially if you're working with several channels at once, but it's a great way of growing a qualitative blog and audience.

Engaging with your audience is a rather broad topic, so we'll spend a few future chapters on several ways of handling this.

There's more to come! Make sure to leave your email address to stay up to date of new chapters being added to this series.

You can always experiment with new things to write about. From time to time I write about random topics that don't necessarily match one-to-one to my current audience. This is a great way to broaden your audience. Remember you're writing for humans, they are interested in more than one topic.

It's ok if such posts doesn't perform as well as you thought it would, you learn from that and move on. Your blog's identity will be shaped over time, thanks to that kind of feedback. Don't try to fight it too much, but also don't ignore your own personality in the process. It's fine to shift your focus over the years to another audience, it's your blog after all.

There's another way of growing your blog. Instead of you reaching out to an audience, it's possible to have them come to you. Having such a recurring flow of visitors means your blog becomes self-sufficient. Sure the social media hype-spikes are nice, but they mean very little in the long run. Take a look at this graph; this is from my first blogpost, which was rather well received on Reddit: 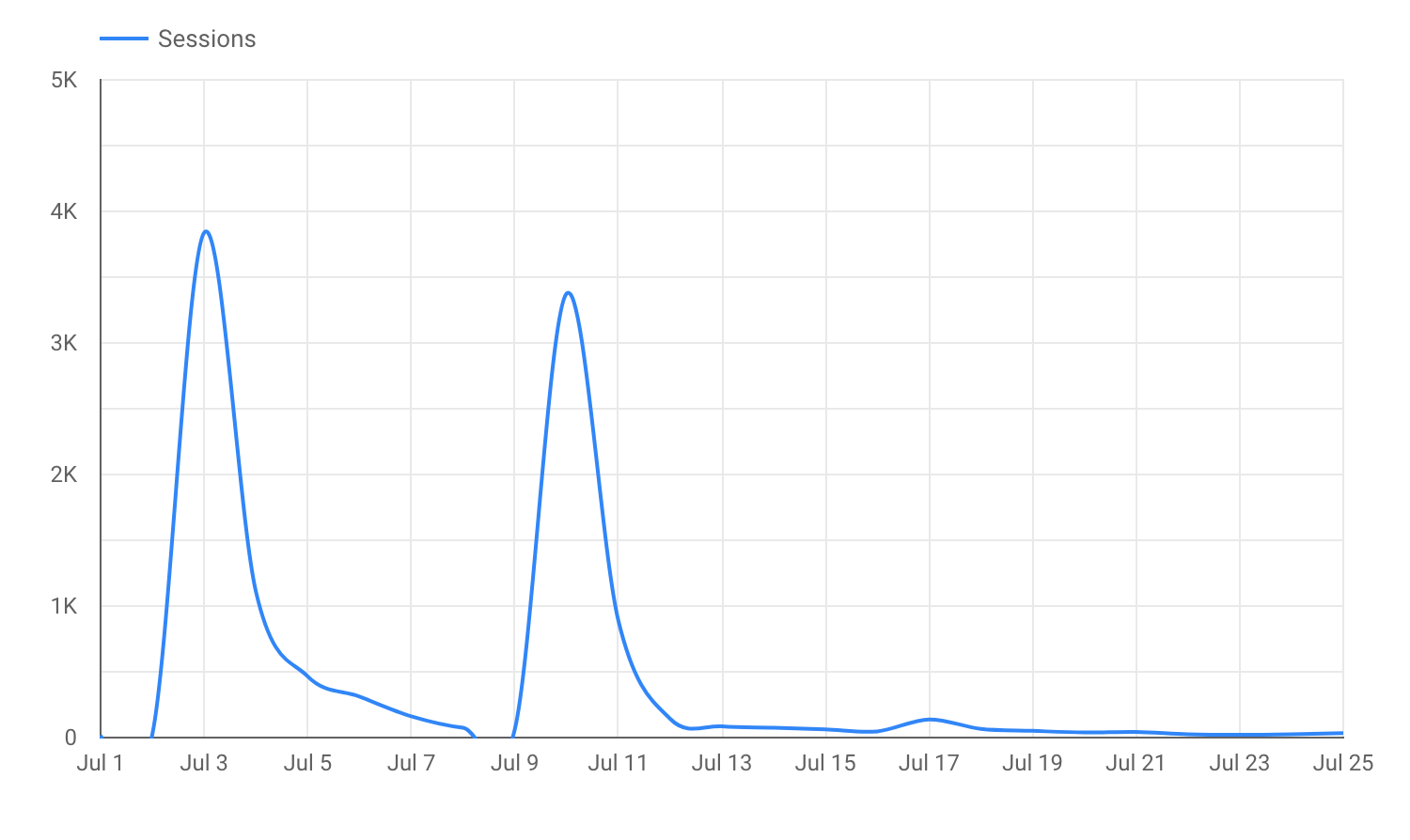 The post actually got picked up by Google's Suggestions, which explains the second spike. More important though is the flat line after those spikes. Sure, I got 8k sessions over the course of a few days, but daily visits went back to almost 0 afterwards.

While social channels are a great way to get these spikes of visitors, they don't provide you with a sustainable audience. You'll need to do more than that.

In comparison, let's take a look at what an average month on my blog looks like these days, without posting anything anywhere: 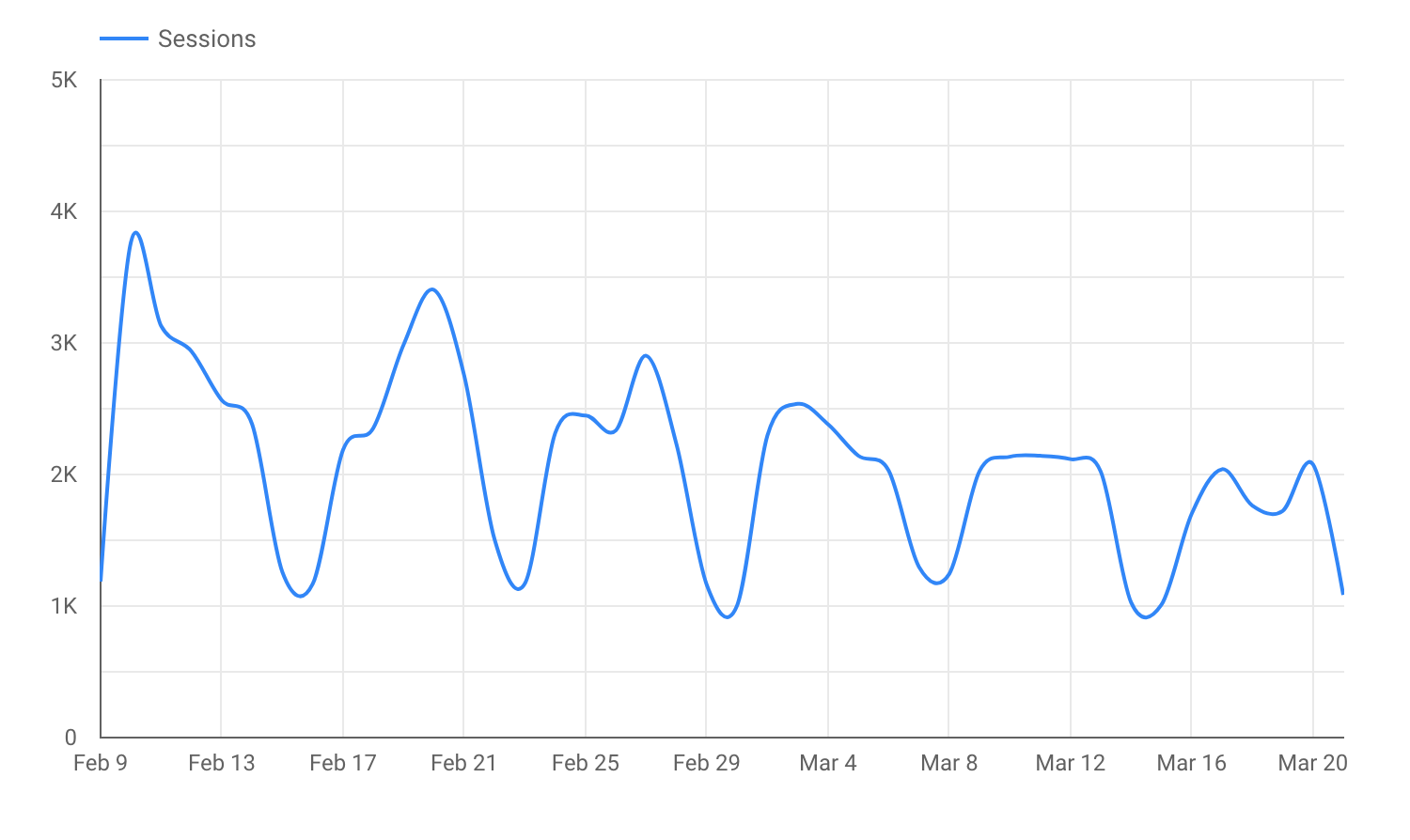 A consistent flow of visitors is what will define the success of your blog. This doesn't happen overnight though. It took me 2 years before this regular flow of people started to come in.

How does that happen? I'd say there are three things to focus on:

There's lots more to tell about building such a consistent flow of visitors, and we'll cover all these points in depth in later chapters as well. So make sure to subscribe to stay up to date!

This series will be released over the course of several weeks. If you want to follow along, make sure to leave your email address and I'll notify you when a new chapter arrives.