We're working on a new package at Spatie. It's called spatie/async and meant to do asynchronous parallel processing in PHP.

Parallel processing in PHP might seem like an edge case for many web developers, but let's take a look at a few use-cases we see at Spatie:

We wanted to create an easy-to-use package, yet one that could solve our use cases. Some of the examples listed above will not use the new spatie/async package, because there's also a queueing system provided with Laravel.

This is how asynchronous code with our package looks like.

# Outperforming Amp? Not quite yet.

If you're into parallel PHP, you've probably heard of Amp and ReactPHP. Our package aims not to compete with those two, as it only solves one tiny aspect of parallelism in PHP; and tries to solve it in a different way.

We did however run some benchmarks to compare our package performance against Amp. Special thanks to Niklas Keller, one of the developers of Amp. He pointed out some mistakes in our previous benchmarks, and helped making them more fair.

The new benchmarks compare a few scenarios. The first two groups plot the execution time of an empty process, while the third and fourth groups show the execution time of processes with a different time to finish, using several sleep intervals. Between the two groups, we're also comparing a capped concurrency configuration and a non-capped configuration. Capped means that there are more processes than the pool can execute at once.

The benchmark code can be found here. 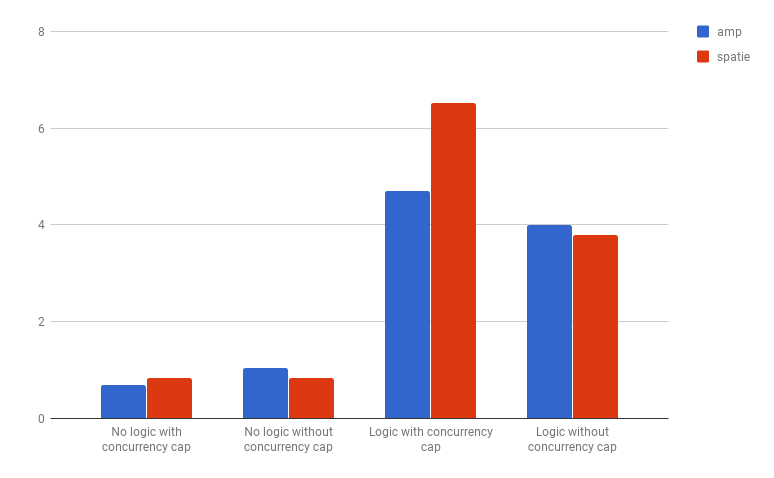 I tried to draw a few conclusions from these test.

We've excluded ReactPHP from the benchmarks, because it's not a fair comparison. ReactPHP doesn't allow to run closures or Tasks as sub-processes the way Amp and our package do. With ReactPHP, you're working with plain processes, so there's no way to compare to it.

The biggest difference between our package and Amp is the way of communicating between processes. We're solely relying on process signals to determine when a process is finished. It allows for less overhead, but also excludes Windows as a target platform.

Processes in UNIX systems can send signals to each other. Depending on what kind of signal is received, a process will act different. Signals are handled by the kernel, so they are pretty low level. Before PHP 7.1 though, you had to declare(ticks=1) to use asynchronous signals in a reliable way. This means that PHP will check for signals much more often, but it also introduces a lot of overhead:

With PHP 7.1, there's a new way of handling interrupts sent by the kernel.

By using pcntl_async_signals(true), PHP will now check for signals in a much more performant way. A more in-depth explanation can be found in the rfc, submitted by Dmitry Stogov.

It's thanks to this mechanism that we're able to act on process status changes in a real asynchronous way, without having to rely on sockets or process status polling.